The Decline Of Sexual Frequency Over Time 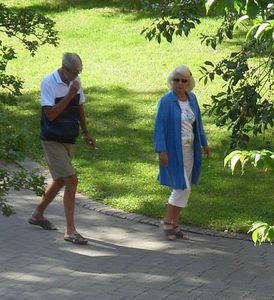 The frequency with which couples engage in sex is affected both by the partners' ages and by the duration of their relationship. In general, older couples have sex less frequently than younger couples. For example, sociologist Vaughn Call and colleagues (1995) surveyed over six thousand married people living in the United States and reported that sexual activity was highest among the youngest respondents (those ranging in age from nineteen to twenty-nine, who had sex approximately ten to twelve times per month), became progressively lower in older age groups (e.g., four to seven times a month among forty- and fifty-yearolds), and reached its nadir among respondents in their seventies (who engaged in intercourse with their spouses less than twice a month). The majority of studies also find that the longer couples have been married, the less often they have sex (Rao and DeMaris 1995; Samson et al. 1991). This decline may be greatest during the first year or the first few years of the relationship. For example, William James (1981) analyzed diaries kept by newlywed couples over the course of their first year of marriage. Couples reported having sex on seventeen or more occasions during their first month of married life; however, by the end of the year, their rate of intercourse had declined to approximately eight times a month.

Because these two age-related factors are linked—as a relationship ages, so do the partners—it is difficult to know for certain whether it is chronological age that causes the decline in sexual frequency or habituation from being with the same sex partner year after year. Both factors probably play a role in producing lowered levels of sexual activity. For example, as men and women age, changes in their physical abilities, increased incidence of illness, and negative attitudes about sex in the elderly may contribute to a less active sex life. At the same time, the loss of novelty that results from having sexual intercourse with the same individual may reduce levels of activity.

Various events that occur during the course of a couple's relationship also are associated with changes in sexual frequency, including factors related to birth control and pregnancy (e.g., lack of interest during pregnancy), to children and child care (e.g., lack of privacy, fatigue), and to work (e.g., heavy work schedules, fatigue) (Greenblat 1983). All of these factors may play a role in limiting a couple's desire and opportunity for sex. Of course, some couples return to previous levels of sexual activity once they adjust to their circumstances or after the situation resolves itself. Other couples, however, become comfortable with the lowered levels of intercourse; they may cease to have sex altogether and/or they increasingly may engage in nonsexual forms of affection and contact.