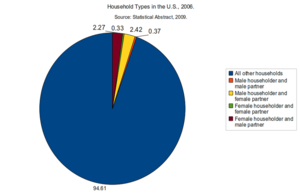 Cohabitation, sometimes called consensual union or de facto marriage, refers to unmarried heterosexual couples living together in an intimate relationship. Cohabitation as such is not a new phenomenon. It has, however, developed into a novel family form in contrast with conventional marriage. Part of this change is associated with the absolute rise in cohabitational relationships. Since the 1970s, many countries, particularly those in North America and Europe, have experienced rapid growth in their cohabitation rates. Although these numbers generally remain small relative to families composed of married couples, the absolute numbers of cohabiting couples have increased dramatically. Cohabitation was obscure and even taboo throughout the nineteenth century and until the 1970s. Nonmarital unions have become common because the meaning of the family has been altered by individualistic social values that have progressively matured since the late 1940s. As postwar trends illustrate, marriage is no longer the sanctified, permanent institution it once was. The proliferation of divorce, remarriage, stepfamilies, and single parenthood has transformed the institution of the family. With these structural changes, attitudes toward nonmarital unions have become increasingly permissive.

Because cohabitation involves a shared household between intimate partners, it has characteristics in common with marriage. Similarities include pooled economic resources, a gender division of labor in the household, and sexual exclusivity. However, even though the day-to-day interaction between cohabiting couples parallels that of married couples in several ways, important distinctions remain. While some argue that cohabitation has become a variant of marriage, the available evidence does not support this position. Kingsley Davis (1985) points out that if cohabitation were simply a variant of marriage then its increased prevalence vis-à-vis marriage would lack significance. Sociologists treat cohabitation as a distinct occurrence not just because it has displaced marriage, but also because it represents a structural change in family relationships.

Cohabitational relationships are distinct from marital ones in several crucial ways. Although these differences have become less pronounced with the increase in cohabitation (and could thus eventually vanish), the following characteristics define the essential boundaries between cohabitation and marriage.