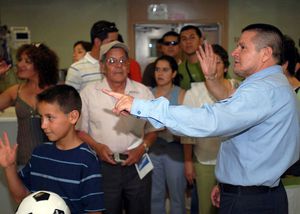 The role of family members is different in Caribbean families. The father's principal role is economic provider and protector of the family. They are also involved in the discipline of the children, especially the males, and often have a distant relationship with their daughters. In general, they are not actively involved in day-to-day childcare, especially for young infants. This should not be construed as not caring for their children; they tend to feel that women are better with children at this stage. However, the late twentieth century saw some men becoming more involved in their children's lives, spending more time playing and talking with them (Roopnarine et al. 1996).

The mother's principal role is to take care of the children and be the primary nurturer in the family. They are also the primary caretakers of the home. Children are required to be obedient, respectful, and submissive to their parents. Girls are expected to help with domestic chores around the house, whereas boys are expected to do activities outside the house, such as taking care of the yard and running errands (Evans and Davies 1996).

There is much diversity in Caribbean families. They are, in some ways, a distinct group because of their multiethnic composition. Although the majority of the families have an African background, which sometimes causes people from the Caribbean to be identified as such, there are families from Indian, Chinese, Middle Eastern, and European backgrounds who identify themselves as Caribbean. The family structure of Caribbean families will be discussed within the context of three of the primary ethnic groups in the region (African, Indian, and Chinese). Although there are some similarities in family structures, each group has unique customs and traditions. Yogendra Malik (1971) noted that although East Indians and Africans have been living in close proximity for more than a century, each group possesses distinct values, institutions, authority patterns, kinship groups, and goals.

African-Caribbean families. Approximately 80 to 90 percent of families in the Caribbean are from an African background, and came as slaves to the region. Most of them settled in Jamaica, Barbados, and other Caribbean islands. Almost half of the population in both Trinidad and Tobago and Guyana is of African descent (Barrow 1996).

The African-Caribbean family has unique mating and childrearing patterns. Some of these patterns include absent fathers, grandmother-dominated households, frequently terminated common-law unions, and child-shifting, where children are sent to live with relatives because the parents have migrated or have begun a union with another spouse. Families tend to have a matrifocal or matricentric structure. Jacqueline Sharpe noted that, "To say that African Caribbean fathers and other men are fundamental to the socialization of children and to an understanding of African Caribbean family life is putting it mildly. That Caribbean men care for their family and provide for them economically has been demonstrated. . . . However, their emotional availability and their social ties to children are unclear" (Sharpe 1996, p. 261–262). A study conducted with students from the University of the West Indies suggested that Caribbean men have poor emotional relationships with their children. As a result, young boys may view family patterns such as matriarchal households, male absenteeism, and extramarital relationships as norms and continue them as adults (Sharpe 1996).

There are four basic types of family structures that affect childrearing, values, and lifestyles. Hyacinth Evans and Rose Davies (1996) describe these as (1) the marital union; (2) the common-law union (the parents live together, but are not legally married); (3) the visiting union (the mother still lives in the parents' home); and (4) the single parent family. Relationships often start as a visiting union, change to a common-law union, and culminate in a marital union. Approximately 30 to 50 percent of African-Caribbean families are headed by a female ( Jamaica: 33.8%; Barbados: 42.9%; Grenada: 45.3%) (Massiah 1982). It is estimated that 60 percent of children grow up in two-parent homes, and 30 percent live in households where they are raised exclusively by their mothers. Children born to couples in the later stages of family development usually have two parents in the home (Powell 1986).

The mother has a nurturing role in the family, and is usually responsible for taking care of the children and household chores. In general, women are taught that their major role is to get married and contribute to their husband's family. From a traditional Hindu religious perspective, women are seen as subordinate and inferior to men (Seegobin 1999).

The principal role of children is to bring honor to their families by their achievements, good behavior, and contribution to the family's well-being. As such, characteristics such as obedience, conformity, generational interdependence, obligation, and shame are highly valued. Children are seen as parents' pride and the products of their hard work. One of the primary goals of marriage in Hindu families is to have children. It is assumed that children will be cared for by their parents as long as is necessary with the understanding that children will take care of parents when they grow old (Seegobin 1999).

Indian-Caribbean families usually share their resources and have mutual obligations to each other. It is not unusual to see several generations living in the same house or in houses built close to each other, even after marriage.

Marriage is an important event for girls, because they are groomed for it from childhood (Leo-Rhynie 1996). At marriage, the woman leaves her family and becomes a part of her husband's family and is expected to be submissive to her husband as well as his family. Men in these families have more privileges and respect, and women are expected to cater to their needs and desires.

However, there have been some significant changes in Indian-Caribbean families. More women are going to high school and university, and hold prestigious jobs (Sharpe 1996). Marriages are also becoming more egalitarian. Fewer of these families are headed by females when compared with African-Caribbean families (Guyana: 22.4%; Trinidad and Tobago: 27%), and when it does occur, these households are usually headed by widows and not single mothers (Massiah 1982).

Chinese-Caribbean families. The Chinese-Caribbean family may be called the "missing minority" because so little is written or researched about them. The Chinese were brought to the Caribbean as indentured laborers between 1853 and 1866. In the late nineteenth century and the first half of the twentieth century, they came as entrepreneurs and were involved in businesses such as laundries, restaurants, and supermarkets (Brereton 1993). Since that time, they have become involved in several sectors in the society, and some hold prestigious jobs in areas such as medicine, sales, management, and politics. The Chinese-Caribbean families try to keep much of the traditions and customs of China, especially in the preservation of their language. They often identify with the districts from which they came in China, and have close associations with people from these districts. Families from the districts usually get together for the Chinese New Year celebration.

Although they provide education for all their children, parents still tend to favor their sons, and push them to accomplish as much as they can. Family problems are usually kept private and only talked about within the family. As a result, these families may appear to be more stable. In general, they are less emotionally expressive, although they more easily show anger than love. Physical demonstrations of love in public are rare. Although many of them identify with religions such as Anglicanism and Catholicism, they continue their Buddhist traditions such as lighting incense, and some have Buddhist shrines at home. They also seem to trust herbal medicine more than traditional medicine. Even though Chinese-Caribbean families have lived in the Caribbean for many years, they are still perceived by some people as an exclusive group because of their lighter skin color.