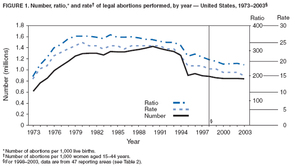 There are probably as many reasons for abortions as there are women who have them. Some pregnancies result from rape or incest, and women who are victims of these assaults often seek abortions. Most women, however, decide to have an abortion because the pregnancy represents a problem in their lives (Bankole et al. 1998, 1999; Alan Guttmacher Institute 1999).

Some women feel emotionally unprepared to enter parenthood and raise a child; they are too young or do not have a reliable partner with whom to raise a child. Many young women in high school or college find themselves pregnant and must choose between continuing the education they need to survive economically and dropping out to have a baby. Young couples who are just starting their lives together and want children might prefer to become financially secure first to provide better care for their future children.

Sometimes people enter into a casual sexual relationship that leads to pregnancy with no prospect of marriage. Even if the sexual relationship is more than casual, abortion is may be sought because a woman decides that the social status of the male is inappropriate. Abortion is reported to be sought by some women because of popular beliefs that forms of modern contraceptives are more dangerous than abortion (Otoide et al. 2001).

Some of the most difficult and painful choices are faced by women who are happily pregnant for the first time late in the reproductive years (thirty-five to forty-five) but discover in late pregnancy (twenty-six or more weeks) that the fetus is so defective it may not live or have a normal life. Even worse is a diagnosis of abnormalities that may or may not result in problems after birth. Some women and couples in this situation choose to have a late abortion (Kolata 1992; Hern et al. 1993).

In some cases, a woman must have an abortion to survive a pregnancy. An example is the diabetic woman who develops a condition in pregnancy called hyperemesis gravidarum (uncontrollable vomiting associated with pregnancy). She becomes malnourished and dehydrated in spite of intravenous therapy and other treatment, threatening heart failure, among other things. Only an abortion will cure this life-threatening condition.

In certain traditional or tribal societies, either the decision to end a pregnancy by abortion or the method of doing so is determined by the group. John Early and John Peters (1990) described a method used by the Yanomami of the Amazon of hitting or jumping on a pregnant woman's abdomen to cause an abortion. A similar method has been described in other tribal societies in Africa and South Asia. Among the Suraya of seventeenth-century Taiwan, a woman under the age of thirty was required to end all pregnancies by abortion by forceful uterine massage (Shepherd 1995).

Studies done in Chile in the 1960s showed that the majority of women who sought abortions at that time were likely to be married, to have the approval of the husband, and were having the abortion for economic reasons (Armijo and Monreal 1965; Requena 1965). This pattern has been observed in many other countries.

In certain Muslim societies, a young couple from feuding families must wait five years or more to have a child, with the result of numerous abortions in order to observe this family rule.

Marriage and Family EncyclopediaFamily Social IssuesAbortion - Definition Of Abortion, Reasons For Abortions, When And How Abortions Are Performed, Risks Of Abortion - Social Responses To Abortion