The Effects On Children 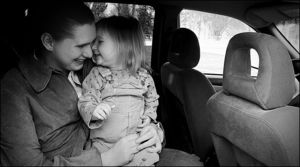 In the United States, the effects of single-parent family life on children fall into two categories: (1) those attributed to the lower socioeconomic status of single parents and (2) the short-term consequences of divorce that moderate over time. Four factors are predictive of U.S. children's adjustment to the divorce of their parents: the passage of time, the quality of the children's relationship with their residential parent, the level of conflict between parents, and the economic standing of the children's residential family. In the first few years after a divorce, the children have higher rates of antisocial behavior, aggression, anxiety, and school problems than children in two parent families. However, some of these problems may be attributed to a decrease in available resources and adult super-vision; many of the negative effects disappear when there is adequate supervision, income, and continuity in social networks (McLanahan and Sandefur 1994).

In mother-only families, children tend to experience short-and long-term economic and psychological disadvantages; higher absentee rates at school, lower levels of education, and higher dropout rates (with boys more negatively affected than girls); and more delinquent activity, including alcohol and drug addiction. Adolescents, on the other hand, are more negatively affected by parental discord prior to divorce than by living in single-parent families and actually gain in responsibility as a result of altered family routines (Demo and Acock 1991). Children in single-mother homes are also more likely to experience health-related problems as a result of the decline in their living standard, including the lack of health insurance (Mauldin 1990). Later, as children from single-parent families become adults, they are more likely to marry early, have children early, and divorce. Girls are at greater risk of becoming single mothers as a result of nonmarital childbearing or divorce (McLanahan and Booth 1989). Although the research findings are mixed on long-term effects, the majority of children adjust and recover and do not experience severe problems over time (Coontz 1997).

A common explanation for the problems found among the children of single parents has been the absence of a male adult in the family (Gongla 1982). The relationship between children and non-custodial fathers can be difficult and strained. Fathers often become disinterested and detached from their children; in one study more than 60 percent of fathers either did not visit their children or had no contact with them for over a year. The loss of a father in the family can have implications beyond childhood (Wallerstein and Blakeslee 1989). However, the lack of a male presence may not be as critical as the lack of a male income to the family. The economic deprivation of single-parent family life, in combination with other sources of strain and stress, is a major source of the problems experienced by both parents and children.