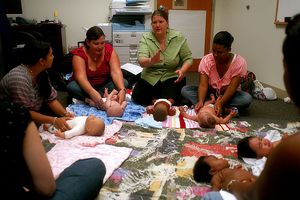 Globally, one-quarter to one-third of all families are headed by single mothers, calling into question the normativeness of couple headed families. Developed countries, in particular, are experiencing an increase in single-parent families as divorce becomes more common. The United States has the highest percentage of single-parent families (34% in 1998) among developed countries, followed by Canada (22%), Australia (20%), and Denmark (19%). In developing countries, divorce is not as common, but desertion, death, and imprisonment produce single-parent families, primarily headed by women (Kinnear 1999). Rates vary country to country from a low of less than 5 percent in Kuwait to a high of over 40 percent in Botswana and Barbados. In countries such as Ghana, Kenya, Rwanda, Cuba, Puerto Rico, Trinidad, and Tobago more than 25 percent of households are headed by women.

There was a dramatic increase in single-parent families in the United States in the last three decades of the twentieth century; only 13 percent of families were headed by a single parent in 1970. Over one-fourth of children in the United States lived with a single parent in 1996, double the proportion in 1970. Approximately 84 percent of these families are headed by women. Of all single-parent families, the most common are those headed by divorced or separated mothers (58%) followed by never-married mothers (24%). Other family heads include widows (7%), divorced and separated fathers (8.4%), never-married fathers (1.5%), and widowers (0.9%). There is racial variation in the proportion of families headed by a single parent: 22 percent for white, 57 percent for black, and 33 percent for Hispanic families.

Historically, single-parent families were the result of parental death; about one-fourth of children born around the turn of the nineteenth century experienced the death of a parent before they reached age fifteen (Amato 2000). The factors most commonly related to the contemporary U.S. single-parent family are changing social and cultural trends, increased rates of divorce and nonmarital childbearing, increased employment opportunities for women, decreased employment opportunities for men (especially African-American men), and the availability of welfare benefits that enable women to set up their own households (Rodgers 1996). It has been estimated that 50 percent of children born in recent cohorts will spend some part of their childhood with a single parent as a result of separation, divorce, or out-of-marriage births.

The U.S. divorce rate steadily and dramatically increased in the thirty year period 1965 to 1995. In 1965 the divorce rate was 2.5 per 1,000 people, increasing to an all time high of 5.0 in 1985 and declining to 4.4 in 1995. The United States has one of the highest divorce rates in the world, twice that of Denmark, Canada, or the United Kingdom. The divorce rate is highest among lower income couples. Divorce is somewhat higher for African-American couples, with 10.5 percent divorced in 1993, compared to 8.8 of white couples and 7.3 of Hispanic couples. Developing regions of the world are also experiencing an increase in the divorce rate, although the proportions remain low in most regions of Asia and Africa.

Most children live with one parent as the result of divorce, but by 1996 the single-parent home was as likely to involve a never married as a divorced parent. Unmarried women in the United States accounted for nearly one in three births in 1995, compared with one in five in 1980 and one in ten in 1970. The percentage of births to single women varies across race. In 1995, 20 percent of all births to Asian and Pacific Islanders were to single women, compared to 25 percent for white women; 41 percent for women of Hispanic origin; 57 percent for Native American, Eskimo, and Aleut women; and 70 percent for African-American families.

For the most part the increase in births to unwed mothers is the consequence of unplanned, accidental pregnancy coupled with the decision not to marry. This includes teenage mothers who are less likely to marry than pregnant teens in the past, as well as adult women who delay marriage while pursuing educational and career opportunities, increasing the probability of pregnancy outside of marriage. Teens account for almost 13 percent of all births in the United States (23% for African Americans, 23% for Native Americans, and 17% for Hispanic Americans, 11% of white births). Approximately one million adolescent girls become pregnant each year, with half ending in birth. The majority of these pregnancies (67%) involve an adult male over the age of twenty.

Since 1990, births have declined among African-American teens and risen among white teens, who comprise two-thirds of teen mothers. The factors contributing to teen pregnancy and childbirth include lack of close contact with adult role models; peer pressure; family poverty; the perception among many teens that few opportunities for success are available; and inadequate sex education, especially about contraception and family planning (Sidel 1998). Girls who have a positive self-image, high expectations and aspirations for the future, and good relationships with their parents are much less likely to get pregnant than others. The United States has one of the highest rates of teen pregnancy in the world, with 53 births per 1,000 women aged nineteen and younger compared to countries at the lower end of the spectrum such as Denmark (nine births per 1,000), Netherlands (six births per 1,000), and Japan (four births per 1,000). Worldwide adolescents give birth to over 14 million children annually.

Another form of parenthood outside of marriage involves single women choosing to bear or adopt and raise children alone. Technological developments allowing insemination without inter-course contribute to women's choices in this regard. Women choosing to conceive children in this manner include lesbians, who may raise their children as a single parent or with a same-sex partner; and heterosexual women who are in their thirties, single, and want children before they are past childbearing age (Burns and Scott 1994). Although an increase in nonmarital childbirth has occurred among well-educated and professional women, it is more commonly found among women with lower levels of education and income.

The rate of births to women outside of marriage in the United States is similar to rates found in Canada, France, the United Kingdom, and other industrialized countries. In Sweden, nonmarital childbirth is twice as high as in the United States, while in Japan only one percent of all births occur outside of marriage. Several Central American countries have high rates of nonmarital births ranging from 67 percent in Guatemala and El Salvador to 53 percent in Honduras. Four factors explain the rate of births outside marriage in these countries: male migration, male mortality, machismo, and pro-natalist attitudes and policies (Kinnear 1999).