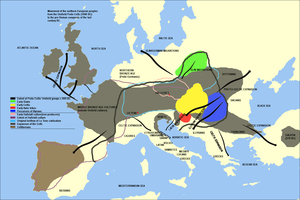 People move for different reasons. These differences affect the overall migration process. The conditions under which a migrant enters a receiver population can have broad implications for all parties involved. The expression migration experience refers to the fact that different causes for migration will produce different outcomes observable from a sociological perspective. For example, a person who moves within a nation will not have the same migration experience as a political refugee. In most cases, refugees need special services from the receiver population such as emergency shelter, food, and legal aid. The psychological trauma of fleeing their homeland and leaving family members behind can also complicate refugees' adjustment to their new environment. Considering that a migrant can be a slave, refugee, or job-seeker, or have some other reason for moving, no single theory can provide a comprehensive explanation for the migration process.

Although a comprehensive theory is unattainable, it remains a crucial task of demographers to explain why people migrate. Theories of migration are important because they can help us understand population movements within their wider political and economic contexts. For example, if outmigration from Third World nations is shown to be a result of economic problems caused by the global economy, then such migration could be managed with better international economic agreements instead of restrictive immigration acts. Indeed, rather than slowing Mexican in-migration to the United States, termination of the bracero program actually increased the amount of illegal immigration because it exacerbated Mexican poverty.

Ernest Ravenstein is widely regarded as the earliest migration theorist. Ravenstein, an English geographer, used census data from England and Wales to develop his "Laws of Migration" (1889). He concluded that migration was governed by a "push-pull" process; that is, unfavorable conditions in one place (oppressive laws, heavy taxation, etc.) "push" people out, and favorable conditions in an external location "pull" them out. Ravenstein's laws stated that the primary cause for migration was better external economic opportunities; the volume of migration decreases as distance increases; migration occurs in stages instead of one long move; population movements are bilateral; and migration differentials (e.g., gender, social class, age) influence a person's mobility.

Many theorists have followed in Ravenstein's footsteps, and the dominant theories in contemporary scholarship are more or less variations of his conclusions. Everett Lee (1966) reformulated Ravenstein's theory to give more emphasis to internal (or push) factors. Lee also outlined the impact that intervening obstacles have on the migration process. He argued that variables such as distance, physical and political barriers, and having dependents can impede or even prevent migration. Lee pointed out that the migration process is selective because differentials such as age, gender, and social class affect how persons respond to push-pull factors, and these conditions also shape their ability to overcome intervening obstacles. Furthermore, personal factors such as a person's education, knowledge of a potential receiver population, family ties, and the like can facilitate or retard migration.

Several theories have been developed to treat international patterns of migration on their own terms, but these too are variants of push-pull theory. First, neoclassical economic theory (Sjaastad 1962; Todaro 1969) suggests that international migration is related to the global supply and demand for labor. Nations with scarce labor supply and high demand will have high wages that pull immigrants in from nations with a surplus of labor. Second, segmented labor-market theory (Piore 1979) argues that First World economies are structured so as to require a certain level of immigration. This theory suggests that developed economies are dualistic: they have a primary market of secure, well-remunerated work and a secondary market of low-wage work. Segmented labor-market theory argues that immigrants are recruited to fill these jobs that are necessary for the overall economy to function but are avoided by the native-born population because of the poor working conditions associated with the secondary labor market. Third, world-systems theory (Sassen 1988) argues that international migration is a by-product of global capitalism. Contemporary patterns of international migration tend to be from the periphery (poor nations) to the core (rich nations) because factors associated with industrial development in the First World generated structural economic problems, and thus push factors, in the Third World.